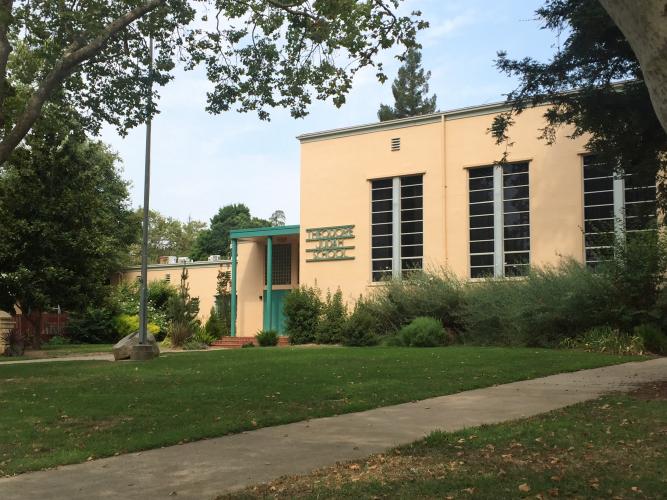 Part of the East Sac Neighborhood History for 95 years and Counting!

Theodore Judah is the oldest continuously operating elementary school building in the City of Sacramento. The school was built in two separate stages under the Federal Public Works Administration (PWA) program in the years between 1937 to 1939. It is an example of both the very basic depression era architecture and the implementation of the PWA’s objective to provide jobs and build community infrastructure. Theodore Judah is the only such elementary school example in the city.

The school open January 26, 1927 as a one-room wooden bungalow. The previous spring, local parents met in the bleachers of the McKinley Park baseball field to begin their successful effort to petition the Sacramento City Board of Education for a neighborhood school. The board agreed and accepted a lease purchase offer for 3.5 acres for $1,000. The site was so remote that a city survey marked over one mile away at the intersection of Alhambra and “H” Street was used as the starting point to locate the property.

A wood frame bungalow with a pot-bellied stove and two drop cord lights was placed on the site and a temporary footbridge was built to afford access over a 50-foot drainage slough on the south side of the school.

Thus the “David Lubin Annex” (soon renamed Theodore Judah) school opened with five students and a substitute teacher from David Lubin. One of the most important school rules prohibited the feedings of the cows and horses in the adjacent pastures. Flies were a significant problem and distraction for the students. A petition requesting window screens was rejected by the school board in the spring of 1927. Cost was probably the reason, but a comment from the meeting deserves mention as an example of bureaucratic logic. The concern was raised that “…once the flies got in the building they wouldn’t be able to get out.”

10 Years as a Temporary School

For 10 years, Theodore Judah School remained an officially designed “temporary” school by the school board, with the students to eventually to return to the David Lubin School. During this period additional bungalows were added to accommodate the increasing enrollment. The city continued to grow toward the east and many of the distinctive homes that grace the McKinley Park area were built during that time. This fact coupled with continued effective advocacy by Mrs. Mabel Bone and other residents resulted in a School Board decision to build a permanent school in early 1937.

Despite the need for a permanent school, the school district did not have the money to build the school with its budget and depended on the PWA to pay its 45% share. A delay in the receipt of the federal contribution, coupled with the lack of any district reserved monies created a temporary financial crisis prior to the construction of the first unit. The second unit was built in the winter months of 1938 to 1939 as a PWA project. A third unit was constructed in 1948, and in subsequent years additional portable buildings, including a full-service cafeteria unit were added to the site.

The move for nomination to the Sacramento Historic Register began several years ago when Annette (Barudoni) DeGlow (Class of 1952) was asked by the former principal of Theodore Judah to put together a slide presentation for the magnet school program. She agreed and during their preparation discovered the school would be 50 years old in 1989. She had made what she described as a sure bet on something with her lifelong friend and fellow alumnus Robert Bone (Class of 1940). The wager was his assistance in putting together a 50th anniversary Open House for the school. He lost, and Mrs. DeGlow and Theodore Judah school won.

A time capsule containing many cards from the alumni, and the original nomination papers for the historic designation was inserted into the schools history wall. The contents were deeded to the Sacramento History Center to be opened in 2027. They were taught the school’s history and were made aware of the plan to seek designation as a historic site.

The three main reasons for the historic designation were

The school’s main building is constructed in a ground-hugging, horizontal design. Inside, it boasts mahogany paneling, glass bricks, tiled water fountains and porthole windows on the auditorium doors. The original paint scheme, apricot with sea-form green trim, was restored.

Today, many symbols of the schools historical character and charm remain intact. From the original hinged teacher’s mailboxes in the front office, the doors with their rounded porthole designs, the radiators in the halls and in classrooms and the smoke stack from the original incinerator.

Placement on the registry doesn’t guarantee the school will never be razed, but it does ensure a more stringent review process if demolition ever is contemplated.